Nutrition of the weaned pig is a process, like many other processes we see on swine farms.

At weaning, we observe that pigs are in a phase of transition. First, they must switch from a liquid to a solid diet. Their digestive enzymes must convert from milk-based enzymes to grain-based enzymes to break down starches and proteins. These pigs are in a new environment where they must shift from many meals on the sow to fewer meals with more competition. Also, they must learn to eat from feeders and drink from new waterers. 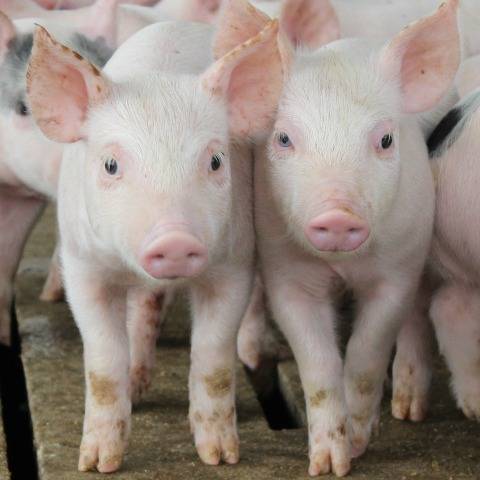 Complex diets allow for a gradual transition from liquid to solids, and ensure pigs develop enzyme systems to handle plant protein and carbohydrate sources. Typical feed ingredients for weaned pigs would include: milk and milk products, fishmeal, refined soybean products, spray-dried porcine plasma and spray-dried egg products. Typically we observe that when feed costs escalate or hog markets deteriorate, producers cut back on their young pig diets. They are essentially moving from complex diets to more simple diets. In today’s economy, with costs higher than in the past, the value of gain increases.

Let’s review the common phases in young pig diets and the recommended rations.

Phase 1: In phase 1 (13-17 pounds), our goal is to transition the pig from a 100 percent milk diet to dry feed. This must be a highly palatable, highly digestible diet tailored to the gut enzymes that are present at weaning. This can be one or two diets depending on weaning weights and ingredient cost differences.

Phase 2: Phase 2 (17-25 pounds) continues the transition from milk-based to grain-based diets. We can reduce the diet costs from phase 1 diets, but they must maintain a complex diet. This phase is often overlooked in times of economic stress.

A study by Hines, et al1 showed that feeding a complex diet improved gain in 37 days by 15 percent, improving average daily gain (ADG) from 0.86 pounds to 0.99 pounds in the pigs receiving the control versus a complex diet, respectively. Days to market were also reduced by 3.5 days.

In a field trial, pigs were fed similar phase 1 diets, and then, during phase 2, pigs were split into two groups and fed either a simple, meal diet or a more complex pelleted diet. (Table 1)


Nursery exit weight improved by 8 pounds and ADG improved by 12 percent. An improvement of 4.5 percent in feed efficiency by utilizing the pelleted phase 2 starter was also observed. Moreover, feed cost per hundredweight of gain and total costs were also reduced by feeding the more complex diet.

Phase 3: Phase 3 (25-40 pounds) is a time when the pig is ready to transition closer to a corn-soy diet. The phase 3 pig is very efficient and in a plane of rapid growth; as a result, higher energy diets are needed during this phase.

Phase 4: Phase 4 (40-55 pounds) is usually similar to phase 1 finishing diets. This is a good phase to introduce DDGS into the diet if they are to be fed during the finishing phase to help transition the pig.

Pelleted vs. meal diets
A pelleting trial was conducted at the Purina Animal Nutrition Center in Gray Summit, MO2 using 160 pigs with 16 replicates per treatment during a 36-day nursery trial.

As Figure 1 shows: with today’s economy, a producer can afford to pay $80 per ton to gain the benefits of pelleting a phase 2 starter diet. This value decreases as diet costs decline due to the decrease in feed efficiency benefits. In general, young pigs respond to pelleted diets with increased average daily gain and lower feed conversion. The response is greater in younger pigs.